I was reminded of the quote below, by Mohandas Ghandi, during an online discussion of the use of prayer beads–a discussion prompted by someone who wasn’t Catholic but decided to use a rosary after reading John Edward’s Practical Praying: Using The Rosary To Enhance Your Life

“I came to the conclusion long ago … that all religions were true and also that all had some error in them, and whilst I hold by my own, I should hold others as dear as Hinduism. So we can only pray, if we are Hindus, not that a Christian should become a Hindu … But our innermost prayer should be a Hindu should be a better Hindu, a Muslim a better Muslim, a Christian a better Christian.” ~~Mahatma Ghandi (Young India: January 19, 1928)

Prayer beads are a special interest of mine—though I don’t own any at the moment—since reading an article titled “A String and a Prayer“ in Spirituality & Health magazine a couple of years ago, which might have been an excerpt from the book by the same title, A String and a Prayer. I just don’t remember for sure. 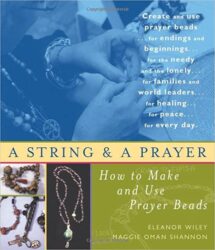 Do any readers here use prayer beads? I’d love to have you share your thoughts.