When I wrote my first post about prayer beads, almost three years ago, I considered buying a ready-made strand or a kit. I started out wanting sandalwood beads, but my budget was constrained, and it wasn’t as if my prayer beads were a necessity.

Then I remembered a string of beads that were once my grandmother’s and had passed through a few family members’ hands before they came to me. Their string was literally on its last thread, so restringing them into a new form made sense. There were about 92 beads, and with the addition of some crystal beads that had been my mother’s as quarter markers, and a larger wooden bead I had on hand as the summit bead, they made a full mala of 108 beads. I added a crystal elephant I’d had for years, along with more crystal beads as counters. 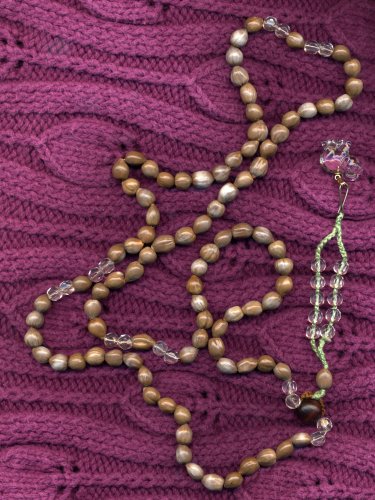 At that time, I didn’t know what my beads were. But when I came across a photo of beads like them online, I learned they’re Job’s Tears. Job’s Tears are natural beads made from part of a grass plant, with numerous uses throughout the world. They’re a humble, common person’s rosary bead, easy to grow and replace. For more information, see the “About Job’s Tears” links below. Here’s a detail view of my Job’s Tears: 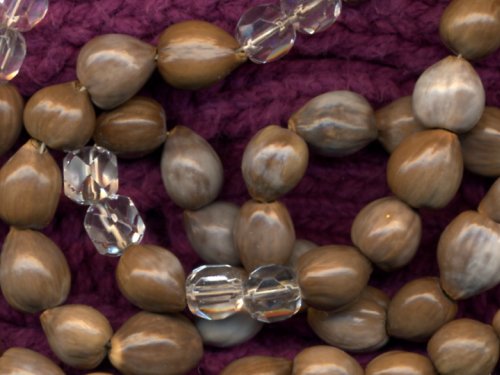 I know next to nothing about making jewelry or stringing beads. My experience is limited to stringing a few strands for myself, not very professionally, and making some tatted lace earrings years ago. But I had fun with this project, and the best thing was that I was able to stick to materials I had around the house. For the counters, I crocheted colored Pearle Cotton into a chain and found that the chain was just the right thickness for the crystal beads to slide over easily with my help, but to stay in place when left on their own. Here are detail views of the elephant and counter beads: 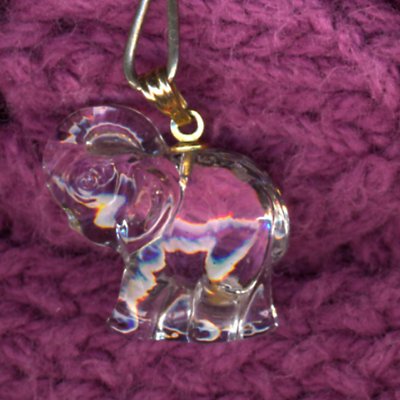 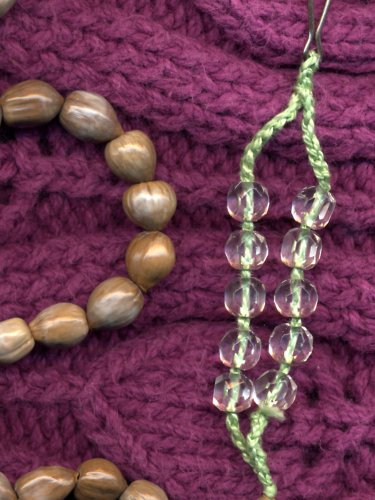 Ten counter beads may seem ambitious, but I wanted this string to fulfill any future goals I might have for working with mantras, prayers, or affirmations.

After using this Job’s Tears strand for a few months, I began to wish for an additional strand half the length or less, for use anywhere that a long strand wasn’t convenient or practical. Additionally, the Job’s Tears hadn’t been easy to restring. I’d used nylon beading thread, which isn’t the most modern, durable material, and the original holes in the beads were small, not always straight, and sometimes difficult to get my needle and string through. Since Job’s Tears are essentially dried flower buds, they’re somewhat fragile and they split easily. In spite of that fragility, they’re also woody, and the little splinters inside tear and fray the thread a bit as it passes through them. Since I slide the beads over the thread as I count, the more I use them the sooner I’ll need to restring them. If they were Job’s Tears I’d purchased, that wouldn’t matter. They’d be cheap to replace if any get lost when the thread breaks. But these particular beads have sentimental value. Next time I’ll try a different thread, and maybe I’ll knot the strand — which I haven’t tried before with beads.

Sanskrit mantra repetition has turned out to be a reliable sleep aid for me, as well as a good way to start the day, so I wanted a shorter strand I could keep by my bedside or carry in my purse. I decided on a half mala for my bedside table.

Finally I remembered some beads I’d made when I was playing around with polymer clay a few years ago. I’d made a necklace to match a favorite outfit, but I’d stuck the rest of the beads away in a jar. I had enough beads already made up for two quarter-malas (27 beads each) and one half-mala (54 beads).

One of the two quarter-malas didn’t turn out to my satisfaction, but I’m very happy with the other two, pictured below. I used more crystal beads as counters, and this time I attached them with a slipknot so I can remove them. That way I can wear the smaller strand as a bracelet without a counter dangling from it. These are strung with a doubled strand of sturdy, size 10 crochet cotton. My polymer clay beads are pretty unsophisticated, in fact rather primitive, with large holes, and even my fingerprints on some of them — so I guess I have to plead guilty that I made them. My favorite thing about them is the colors and shapes, which suit me just fine. Another advantage is that they don’t have splinters inside like Job’s Tears or sharp edges like some semi-precious stone beads, so they won’t wear the string out anytime soon. Of course there are more durable beading cords that can be purchased, but I’m still working with what I have on hand.

The purple beads look bluer here than they actually are: 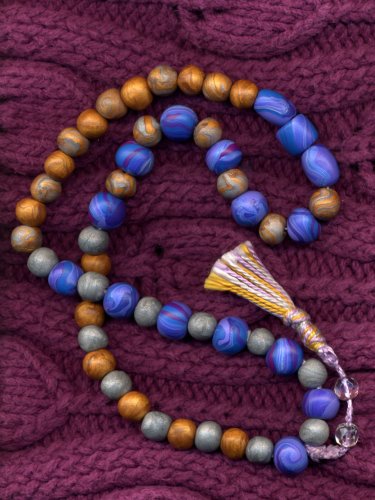 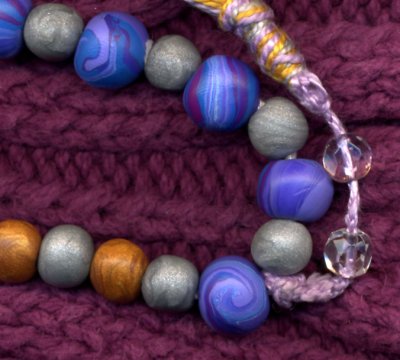 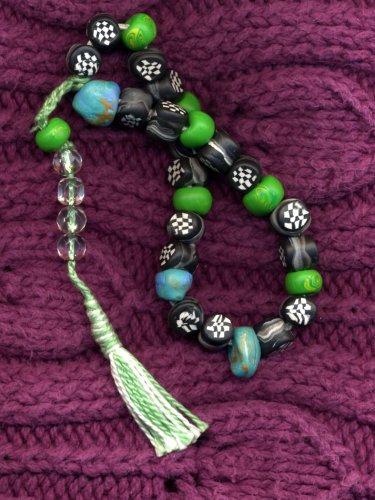 I’m not sure polymer clay is the best material environmentally or energetically to use for prayer beads. Polymer clay is primarily PVC, which isn’t natural or biodegradable. But these beads have come in handy, and I don’t worry nearly as much about something happening to them as I do about my Job’s Tears, which carry sentimental value. I still use my Job’s Tears as well, because I love the natural feel of them in my hands.

I’ve recently remembered another craft supply that I bought and squirreled away to try later. Creative Paperclay modeling material is reportedly made of natural, biodegradable, and completely non-toxic materials. It can be fashioned into shapes and, once dry, it can be painted with water-soluble paint, sanded — basically treated like softwood — and then varnished or lacquered to protect the finished piece. I could even omit the varnish and let my Creative Paperclay beads gradually return to nature.

So my next prayer bead goal is to make beads out of Creative Paperclay and experiment with including ground dried rose buds, as a bow to the original rosaries, which were so named, according to some sources, because they were made from rose petals.

This Garden is Illegal: Job’s Tears: Gardening for Crafters

The Most Worn Bead Plant

How to make rose petal beads:

Beads For Prayer: How To Make Rose Petal Beads

Catholic Culture: To Make Rose Beads for a Rosary

If you’re not interested in working with beads, but you count knot tying among your skills, you might want to consider making your own knotted prayer rope out of cord, following these instructions: How to tie an Orthodox Prayer Rope knot.

Perhaps the most comprehensive and well-researched site I’ve found on prayer beads is Karen’s Prayer Beads, where Karen Deal Robinson covers many different traditions, how and why she designed her personal strings of prayer beads, and ideas about how to use them, including her own versions of some prayers.

Most of what I’ve learned so far about Sanskrit mantras has come from two books and a CD by one author, Thomas Ashley-Farrand:

includes a few from other traditions as well.

I also own a book titled Meditation

, by the late Eknath Easwaran, and several of his other titles

are on my wish list. I recommend his writings for helpful information and instruction in meditation and mantra use, provided from an Eastern perspective (he was Indian by birth) translated for Westerners.

I find that repeating certain of these ancient mantras helps me gain peace and center myself. I try to select those that suit my individual needs. There are Sanskrit mantras for protection, for improving relationships, for healing, to enhance creativity or abundance, and for simple devotional practice. In a sense Sanskrit mantras have provided me a “reset button” for my brain, helping me to silence all the negative and cluttered thought patterns that modern life seems to burden us with.

If your interest is primarily in Buddhist mantras (also traditionally written or recited in Sanskrit), the most commonly used and most well-known one is Om Mani Padme Hum, with the Green Tara Mantra coming a close second: Om Tara Tuttare Ture Swaha. A search for either, enclosed in quotes, will lead you to numerous sites discussing their use. I’ll share just a few here. Tibetans pronounce the Sanskrit words a little differently than Buddhists from other places, and the first link below includes an amusing story about “correct” pronunciation.

You don’t have to be a Hindu or Buddhist — I’m neither — to benefit from Sanskrit mantra practice or meditation. Neither do you have to be a Catholic — I’m also not — to pray the Rosary. In fact, you don’t have to be spiritual or religious at all to use beads for repetition, affirmation, and focus. Someone who’s uncomfortable with any form of spiritual practice still might find strings of beautiful beads helpful for centering practice or for repeating affirmations to help improve their quality of life.

Various religious and philosophical prayer bead traditions and their associated prayers or mantras:

The Threshold Society: The Most Beautiful Names of Allah

A Detailed Guide to Our Lady’s Rosary

A Beginner’s Guide to the Rosary

How To Pray The Rosary

I could probably keep adding more, because this topic obviously fascinates me and I love to read about it. But if you’ve gotten this far and you still want to know more, I’m sure you’ll find your way to what you need on your own. If you decide to make or buy prayer beads and use them, I hope they provide for you the same peace and healing balm they have for me.