Not just any dragonfly. A Red Dragonfly. It flew into my side yard yesterday while I sat idling, taking a break from the internet and my dependence on it, thinking about spending the rest of the day knitting. I sat there looking at our avocado trees, which currently include three new, young ones, two in the ground, one in a pot, the smaller trees staked with bamboo sticks.

On one of those bamboo sticks, this Red Dragonfly landed, took off, flew around, and came back again to sit on top of the bamboo. It did this a few times before I realized what it was doing, using the top of the bamboo stake as a vantage point from which to hunt the tiny insects it kept flying up to snap out of the air. (Photos at bottom of post.)

I was awestruck by its blazing vermilion color, the golden gleam to its eyes, the sparkle of translucent – no, transparent – wings in sunlight. If one ever wonders where stories of fairies come from … I go on a lot about fairies sometimes, too much for those who don’t believe in them. But if you’d seen this creature in your yard, I promise you’d be talking fairies too. Or dragons … or something mythical and mysterious. It was like a piece of priceless jewelry, a delicate carnelian carving fit for the bosom of an empress. As obvious as all that purple prose I just indulged in here, yes, that bright. Neon bright.

It held me so mesmerized that it took me a good ten minutes or more to realize that it was going to stay for a while, that I had time to go inside for my camera. It let me get close several times, snapping pictures, before I ventured too near for too long with my glass lens staring it down, and it either decided it had eaten enough bugs for the time being or that my camera and I were too close for safety, and it flew away for good.

So ended my twenty minute or so immersion in the world of Red Dragonfly.

This morning I looked up dragonflies on the internet, and once I got past my easy assumptions and quick conclusions and really studied the matter, I learned that this Red Dragonfly was a Neon Skimmer (Libellula croceipennis), and that it’s only slightly less common in my part of California than the similar Flame Skimmer. I know more about dragonflies in general now, which still isn’t much, and I can name this stunning creature if it ever graces my yard again. But nothing I’ll ever read on the internet can compare to watching this specific Red Dragonfly in my yard.

I sometimes resent the internet lately, because I’m so addicted to it and waste a lot of time on it, especially on internet forums where opinions seem to build up like pieces of old, tattered clothes, which are really only good for one thing: rags.

I’m not capitalizing the word “internet” in this post. I’m in rebellion against it being considered a proper name, this label for the endless source of old rags. Why capitalize its descriptive label, when we so seldom any longer capitalize proper names like Earth, Nature, or the Moon, or even that immense and necessary life-giving force, the Sun? Yet we’re so careful, and the spell-checker never fails to remind us, to capitalize this man-made, here-and-yet-not-really-here, insidious phenomenon known as the internet.

I’m in a Nature-reverent mood, because this thing happened yesterday, which, yes, the internet helped me research today. But it’s the thing that happened, the awe-inspiring Gift From Nature that still astounds me. It would be every bit as awe-inspiring without the internet, in fact, who knows, perhaps more so, because part of it would still be a mystery that now isn’t.

My intent here is not to trash the internet, and I appreciate, beyond words, those who share valuable information, artwork, writing, photographs, and so forth on it. I use a lot of open-source software, and I’m ever so grateful for that.

I found some helpful resources of information about Dragonflies just this morning, which I’m happy to share here:

Dragonflies (Odonata) of the Southwest

I still, again and again, find Nature much more astonishing than the internet, and I urge anyone who gets stuck as easily on-line as I do to go sit for a few hours outside, or saunter outdoors, but don’t work too hard or walk too fast, because if you do you’re likely to miss something. Even working hard can provide these moments, though. I remember a few years ago when I did a lot of gardening, so much that one day while I worked, I got a terrible pain in my neck. I kept resisting it, then finally gave in and paused, rubbing my neck for a moment under the hot sun, when a butterfly chose just that moment to fly right past me and land on a nearby flower, a Mourning Cloak Butterfly, a type I hadn’t seen since I was a child, when they seemed to be everywhere near our house. It reminded me of how we saw such things every day when I was young and children actually played outside. There was also the time my spouse found a Garden Slender Salamander in our back yard (at another house). It looked just like an earthworm until closer inspection revealed its tiny feet and face.

This has been a good year for butterflies here, but the Red Dragonfly is the icing on my nature lover’s cake.

I urge you to go play outside, right now, or as soon as the sun rises if it’s dark when you read this, or for that matter why wait for daylight? The internet, new, novel and fresh as it seems, will still be here when you get back. There’s something out there waiting. Nature wants to surprise you, astonish you. I’m certain of it. You’ll see Something Important. Something you’ll never forget, if you don’t miss it by just sitting here staring at the screen. 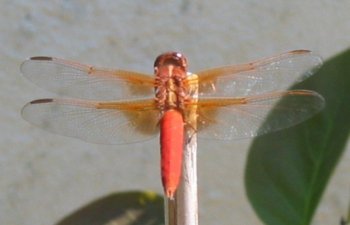 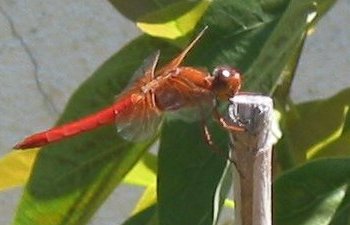 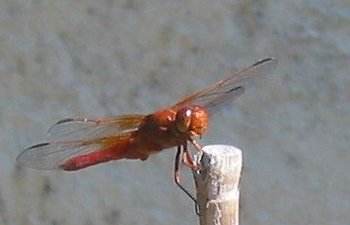 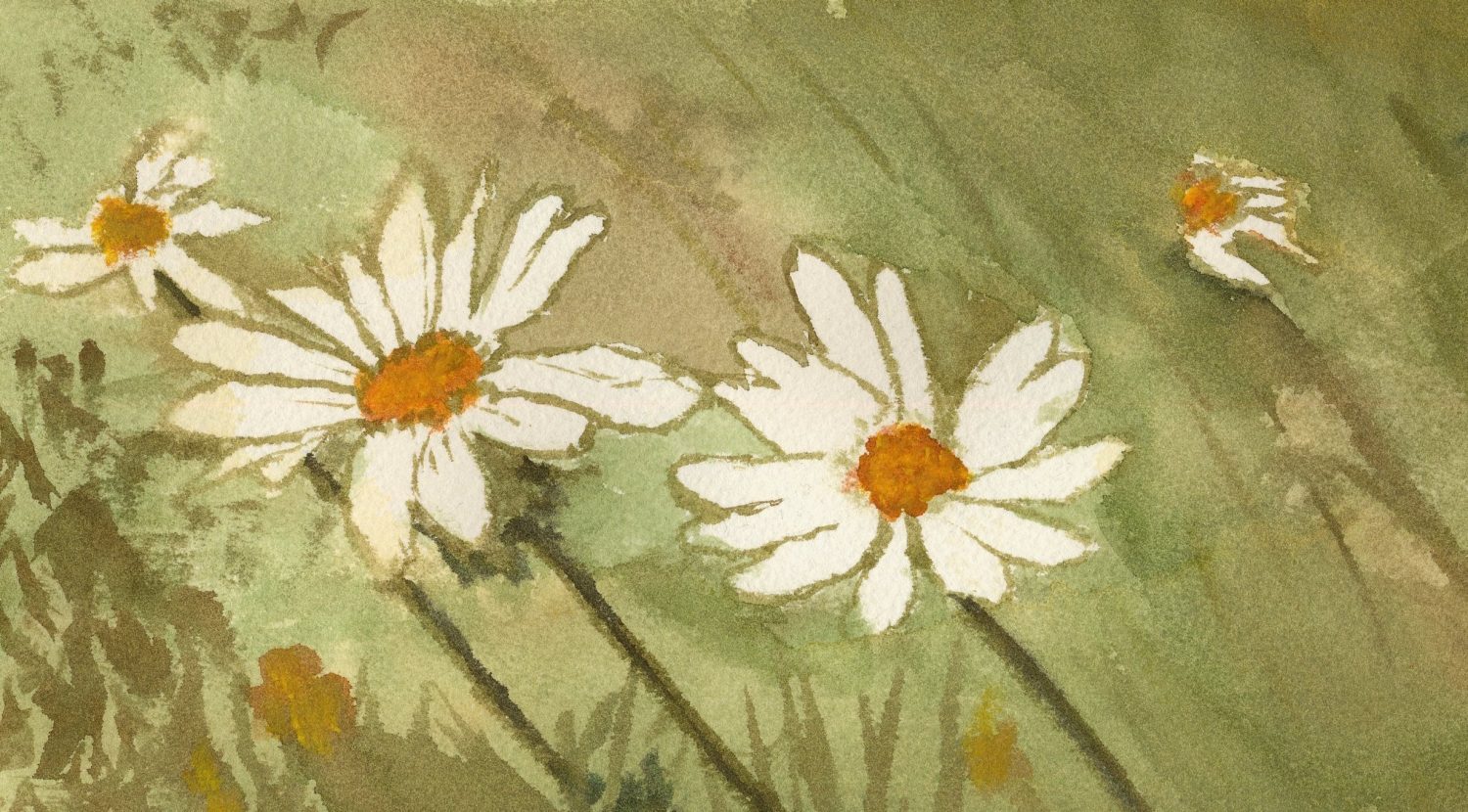